Well, some friends from the hospital wanted to go camping, so I invited them up to the hideout for a few days.

The trip actually started the day before when Britt and I went out to mow the grass and check on the hammock stands we built during the last trip up there. Well, The posts were loose. so I repacked dirt in while Britt worked her butt off mowing the ever expanding plot of grass. Well, even after, we were a little unsure of whether the posts would hold our weight. so we decided to anchor them.

So before Zac, Conner, and I went out on Monday, I went hunting for parts. I got some cable from my grandpa Dennis. some old water pipe for the anchor, and some more eye-bolts and clamps to hold the wire. and it worked like a dream!

and with that, the hammock project was a complete success! 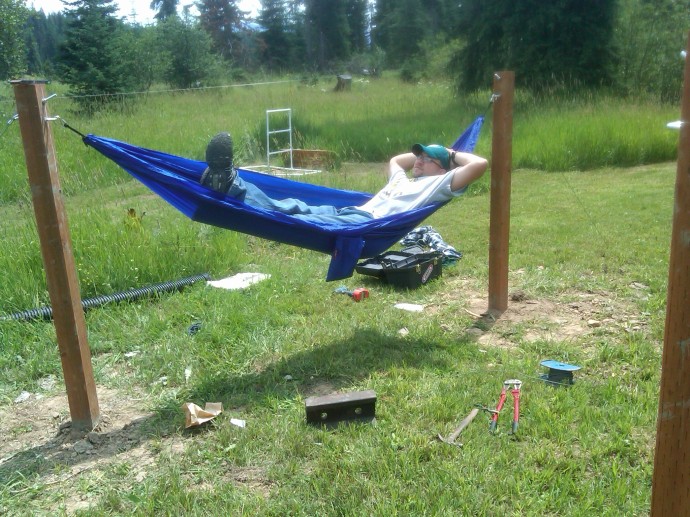 I even slept in it after a crazy thunder storm that my grandma later said was the worst she’d seen in some years…and I stayed dry!

Then after a long and HOT hike, I made some fish from my previous post.

I actually think I prefer sleeping in a hammock over a tent, it’s a little weird to get used to at first, but man is it a good sleep. Probably the best camping sleep I’ve had. go buy one!